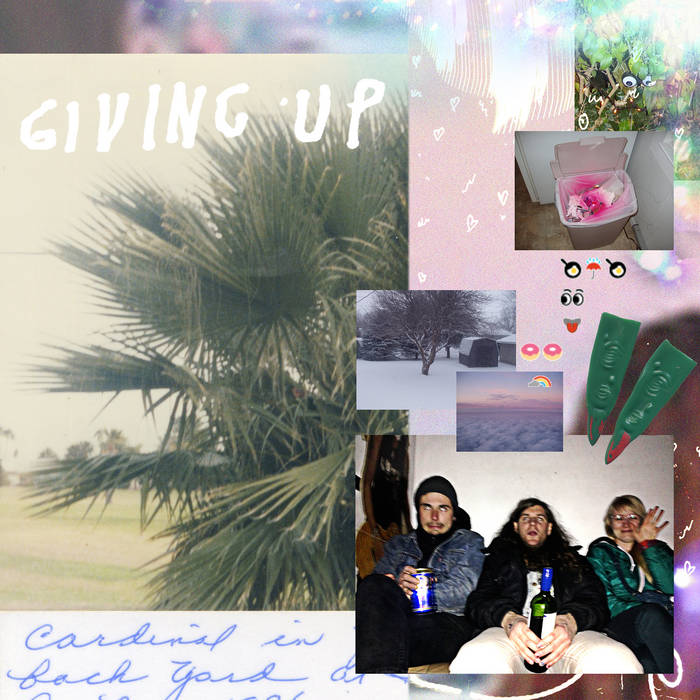 It's strange to believe that Giving Up's latest and greatest effort Garner Cardinals is only their third official full-length since forming over a decade ago in the unfinished basement bedrooms of rural Iowa. For a band that's toured no less than semi-actively around the calendar and self-released no fewer than too-many-to-count cassette and CD-R transmissions throughout the course of some Bush Deuce, double Obamas, and whatever the fuck is happening now...one would be misled in thinking the scarcity of their studio output would imply any lack in overall drive.

Like their label co-conspirators and spiritual siblings State Champion, Giving Up is a geographically challenged unit. With membership ranging from Minnesota to Kentucky plus a couple places in between, a bulk of the creative grunt is handled by head songwriter / visual artist Mikie Poland and his key collaborator / key boarder Jenny Rose (w/ additional contributions by Sean Roth, Aaron Osbourne, Dusty Van Ness) – trading ideas over the years by phone, mail, smoke signal, psychic will, home recordings, home visits and the like.

But very much un-like their earlier outings in the LP format – the charming yet head-scratchingly produced debut Gthrowing Up (2009) and better but nearly aborted follow-up [peace sign / frown face] (2012), both cursed with more coincidental oddities and studio mishaps than a tragi-comedy classic rock mockumentary – Garner Cardinals is a statement made on the band's own desired terms. Engineered by their touring drummer Dusty Van Ness in the comfort of his Minneapolis home, the record is a best-of-both whirlwind delivering DIY bedroom grunge aesthetics with a self-puffed studio sheen. Serving not only as a natural stepping stone from the dumpster-fi fog of a Jad Fair-fronted Screeching Weasel tape boiled to perfection in a roadside hotel tub exhibited on recent tour trinkets, but also as a “coming of age” mark for Poland's idiosyncratic song-kraft.

From the album opener “My Body” – a gate-blast of jangled energy lighting the stage for skeptically optimistic dandelion punk to follow – through the motoric schoolyard kraut-pop of “April Showers” to the memorably off-kilter closer “People's Records,” rounding out the album in a sizzling glory of rambling narrative poetics, the band's bar is undoubtedly raised over the course of these ten tracks. And if you ask me, we're all better for it.

By the time we're flipping it over for a second listen, the Cardinals' song is already wormed deeply into our ears en route to our skeptically optimistic dandelion hearts, if not a larger collective midwestern sub-conscious awaiting. Rural Iowan rock music in the almost-2020s. What the fuck could it even sound like? Is it good? Well, I'll tell you. It's a familiar song – catchy, sweet, abstract, loud...”pretty bird, pretty bird...”

I continue to go deaf for that.

mikie, sean, and jenny were all snuck out of their 16 year old bedrooms to hang out and cause trouble. now they sneak out of their respective 20 to 30 something year old major midwestern towns to return to iowa, write songs, goof off, and feel feelings. ... more

Bandcamp Daily  your guide to the world of Bandcamp